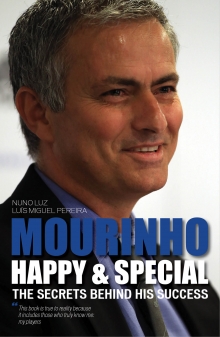 The book that finally open the doors of the tunnel, lurking intimacy of their teams and shows the backstage of wins as we had never seen before. As explained José Mourinho: “This book is true to reality because it includes those who truly know me: my players.” Sir Alex Ferguson added: “José, my words for your book are OK with you.”
Includes the exclusive participation of Mourinho and more than 40 figures in world football who crossed with him over the years, such as Sir Alex Ferguson, Peter Kenyon, Florentino Peréz, Cristiano Ronaldo, Frank Lampard, John Terry, Didier Drogba, Petr Cech, Deco, Paulo Ferreira or Maradona, who, among many others, tell us unpublished stories that help us to understand what makes Mourinho the best coach in the world.
Contains handwritten messages of some of the great figures of football (such as Sir Alex Ferguson) and includes exclusive photos from the personal archive of José Mourinho.
Originally published in Portugal, where it was several weeks in the national nonficcion top 10, has been already translated into Spanish, Polish, Japanese and Chinese.